After giving McKenzie the Sugar Plum Ballerinas series, I continued to think about the lack of diversity in children’s books. In January 2015, these thoughts were somewhat derailed by my engagement and subsequent wedding (it was a busy year). Once Christmas 2015 rolled around, I again asked McKenzie, “What do you want for Christmas?” Her answer, “More books.” She wasn’t making this easy.

As you can imagine, the same problem from the previous year was staring me in the face. This time I settled on a box set of a series called The Goddess Girls. It was a take on mythological goddesses but featured some diverse characters. I wasn’t nearly as excited about this series as I was about the Sugar Plum Ballerinas. I don’t think McKenzie was either. Her eyes lit up more for the charm bracelet included in the box than the actual books. This was a real problem.

Very few know this but as a child, I always wanted to be a writer. In fact, I still have the writing journal I kept as a child. I was always writing poems, stories, birthday cards, articles, even scripts for school plays. As long as I was writing, I was happy. This love of writing grew from my love of reading.  So in the sixth grade, I woke up one day and decided I was going to write a book. It was called The Evil Twin. It was a three-part series that I rolled into one big book. I was so serious about it that I got my best friend, Antoinette, who was a great artist to illustrate the book. 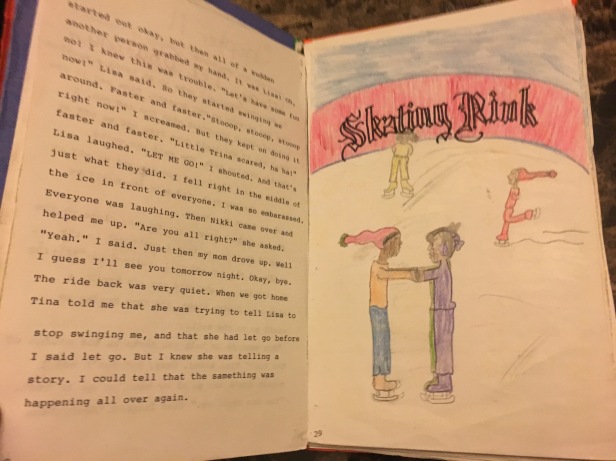 I spent my whole winter break typing the book on a typewriter (yep, no home PC yet). I then created a hardcover out of old cardboard puzzle boxes and covered it in construction paper. I had my own little book release and let family and friends read it, even garnering some great written reviews. It felt real. There was no doubt in my mind that I was going to be a writer. But then somewhere along the way, someone told me that writers don’t make money and it wasn’t a feasible career, so I let it go. Never tell a child what they can’t do. It sticks with them.

Here I was in 2016, and the twelve-year old me was begging to come out and write, but now with an even bigger purpose. But like any practical adult, I ignored it. I didn’t have time to write. I had responsibilities, a new husband, and a job (that I was increasingly becoming more annoyed with). Then, I read an article about a little girl named Marley Dias. She started a campaign called 1000 Black Girl Books. She was also tired of not finding books with characters who looked like her (prior to posting this, I read another article about a little boy who shares the same sentiment).

I felt like it was a sign. At the same time, I was really starting to have anxiety about my job. I needed a creative outlet. Maybe writing would benefit McKenzie as much as it would benefit me. So, it was final. I would write. Nothing serious, but something just for my niece. Not only would I write a story for her, but I would base the character on her (infused with pieces of me).  I started to write, and three weeks later, I had a book. Maybe childhood dreams do come true.

3 thoughts on “What happens to a dream deferred?”